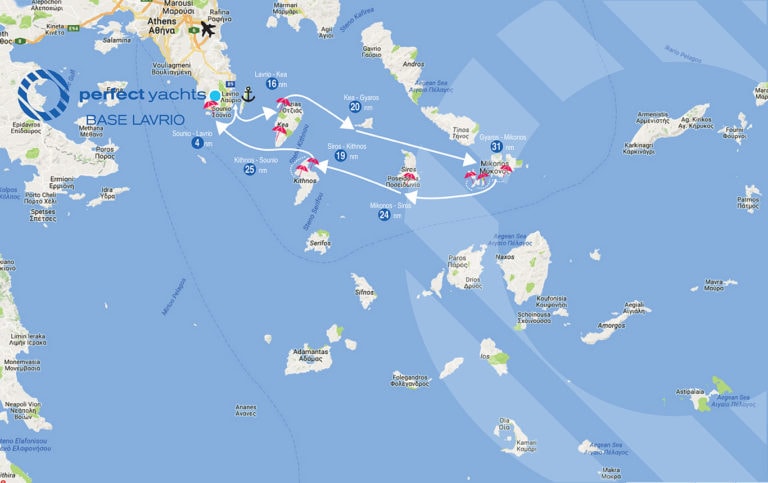 Our first stop is Kea (also known as Tzia), a Cycladic island with a different landscape and architecture than the rest. You will not see little whitewashed houses and blue domed churches here. Kea is characterized by earthy tones and elegant architecture.

Sailing further east, you will encounter Gyaros. An arid, deserted island that served as a place of exile, imprisonment and torture for thousands of Greek communists. Nowadays it hosts the largest population of monk seal in the Mediterranean and thus is of great ecological importance.

Our next stop is Mykonos, worldwide known for its cosmopolitan atmosphere and vivid nightlife. With its exceptional beaches, amazing sunset, award-winning restaurants, epic parties and 5-star service Mykonos will definitely seduce you. Stroll around its narrow-paved streets, swim at its exotic beaches and dance the day away at famous its clubs.

Sailing off, don’t miss a visit to Delos and Rineia. Uninhabited today, Delos was a sacred island for the ancient Greeks, since -according to mythology- it was birthplace of Apollo and Artemis. The name “Cyclades” refers to the islands forming a circle around Delos.

Next stop is Syros, the capital of the Cyclades. Venetian mansions, spectacular sunset views, narrow alleys, neoclassical buildings and impressive catholic and orthodox churches; Syros will impress you with its picturesque scenery.

Heading further west, visit the east coast of Kythnos and moor or anchor at the picturesque port Loutra.

On your way back to Perfect Yachts Base in Lavrio, don’t miss the opportunity to anchor at Cape Sounio, just 4 nautical miles from our Base. Enjoy a nice swim under the Temple of Poseidon and taste fresh seafood in one of the local taverns. 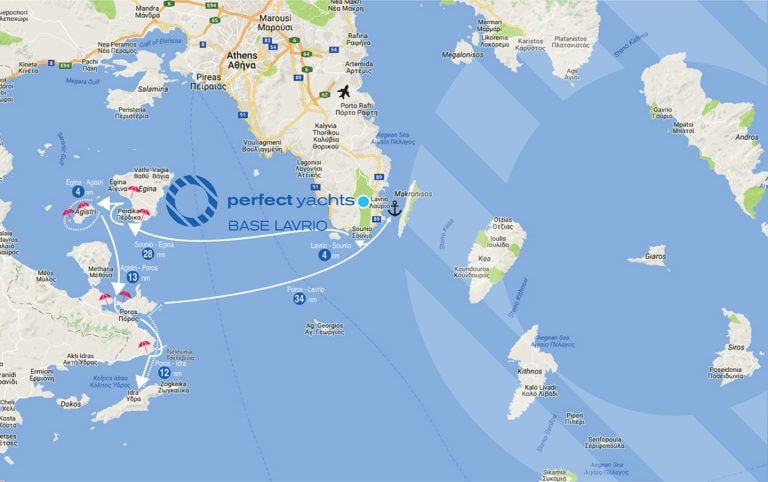 Sailing to the South and heading west from Perfect Yachts Base in Lavrio lies – just 4 nautical miles away – The Poseidon Temple on cape Sounio. It is the best option to spend the night on a 7 days yacht charter to the Saronic Gulf islands. You can choose to prepare a delicious dinner on board your luxury yacht or take your dinghy and visit the local 2 taverns for fresh fish and the most remarkable view of the Temple.

Next morning, after breakfast, you can set sails to lovely Egina and the small port of Perdika or sail further towards the west coast to Egina’s main port. Don’t miss a visit to the fish market where you can taste the best Greek delicacies and of course try the famous pistachio of Egina, sold in many shops as a local product of high nutritional value and unique taste.

Sailing south-west lies a small gem of the sea – Agistri! The water around this magnificent island counts more than 50 shades of blue and it will stay in your memory for ever.

Your next island is Poros, divided from Peloponnese with a very narrow crossing. Wonderful local color, houses with tiles and colorful shutters, superb food and friendly people will make your stay very pleasant.

Sailing south towards Ydra don’t miss a refreshing swim at Tselevinia, a favorite stop spot for all sailors in the area. After that, be prepared for the breathtaking view of Hydra.

The port of Hydra can be really super overcrowded during the high season period, so make sure you are up for it. Other than that, she is the Queen among the Saronic Glulf islands, with lovely tavernas, lively night life and exquisite little shops for holiday shopping. It is no mistery to us why Leonard Cohen, the famous lyrics and music writer, spent most of his life here.

A true adventure, for serious and experienced sailors starts from Perfect Yachts Base in Lavrio directly to the port of Adamantas in Milos – the island of pirates! Pure open water sailing, aprx. 62 miles into the Aegean Sea, will restart your mind and body as a first day of your sailing trip. Countless rocky, spectacular locations, famous Kleftiko (we highly recommend anchoring and swimming there) and the crystal clear sea around this unique island will remain in your mind for ever. At the port you can enjoy Greek delicacies at Gonia, at the capital city Plaka look for Mavros Xoiros Grill house. On your way heading north make a nice stop to Pollonia, a small port, where you can anchor and have nice food. Best Taverns there are Gialos and Enalion.

Sailing north-east lie two one-of-a-kind islands: Kimolos and Polyaigos. You can moor at main port of Kimolos Psathi and enjoy a great meal at the tavern To Kima or anchor at Prassa and swim to tavern Prassonisi, enjoy the day and then swim back to your luxury yacht. If you are looking for a very special place to spend the night you can anchor at Mersini in Polyaigos where you can have the best, refreshing morning swim ever!

Next stop is Sifnos famous for its traditional recipes. You could sail towards the port of Platis Gialos, where you can swim and have a snack at Omega 3. The main port of Sifnos is Camares where you can have lunch or dinner at Tavern Absinthe. Take a taxi and definitely visit the capital city of the island. Apollonia is a real beauty and Tavern Okyalos is an excellent choice.

Sailing north, after a short couple of hours you will encounter Serifos, where you can spot it’s capital city climbed up the tallest hill of the island. Don’t miss a nice dinner at Plakes tavern and a refreshing drink at Vatrachos bar. Main port is Livadi, with the well known tavern Ydrolithos, fish tavern Kalis and a great bar at the Yacht Club. The best beach to anchor is Psili Ammos where you can swim and enjoy a meal at tavern Manolis.

Returning slowly back to our Base a stop at Kythnos is essential. You can choose the main port Merihas and the tavern Ostria, or further north Apokrisi where you can anchor and swim. Nevertheless, don’t miss the double sided Kolona beach where you anchor, swim and visit Kolona Bar – Restaurant.

Your last stop before returning to Lavrio can be Koundouros Beach or Karthea Beach in Kea where you can anchor, swim and sleep under the stars of the magical, clear sky.